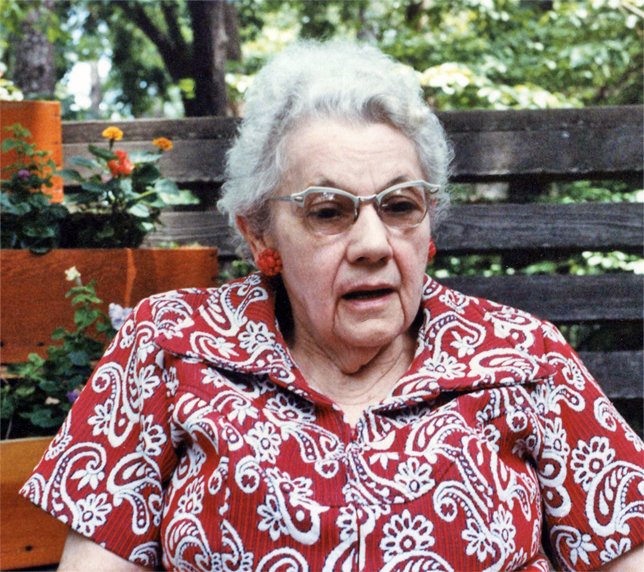 Verna Bidwell first met Louis Gregory in 1942, then again in 1943, and became a member of the Baha’i Faith as a result of his second visit. The first visit possibly took place at “my” previous residence on Cliff (or Clifton) Road, also in Birmingham. She thinks he also had visited Miles Collage[1].

I heard there was a Baha’i named Verna Inglis Bidwell (neé ‘Lence’) who was one of the few people still living who had met Louis Gregory, a well known and respected Baha’i travel teacher. On 5 Aug 1951, Shoghi Effendi, the Guardian and spiritual leader of the Baha’i Faith appointed Mr. Gregory, posthumously, to the rank of ‘Hand of the Cause of God’.

I made arrangements to travel to Birmingham, Alabama to visit a Baha’i family. It was from them that I learned about Verna Bidwell. I requested the assistance of Dianne, a local Auxiliary Board Member, to arrange for me to interview Mrs. Bidwell. She made contact with her via telephone and received permission for me to visit her at home. I asked Dianne to accompany me because as a Birmingham native she is very familiar with the area.

During the interview Verna Bidwell mentioned that she first met Louis Gregory in 1942, and again in 1943, and became Baha’i as a result of his second visit. She recalls that his first visit mostly likely took place at her previous residence on Cliff (Clifton?) Road, also in Birmingham. She also said that at some point he may have visited Miles Collage[1], but she was not certain.

As described by Mrs. Bidwell, she remembers Mr. Gregory was being mild mannered, serene, but very dynamic. She recalls that he was very much aware that in order to communicate with people in the south that he must base his Baha’i talks on the Bible.

It became increasingly evident during the interview that it was difficult for her to recall much detail, due in part to passage of time and her advance age. So, that which is recorded is the extent of our conversation regarding her recollections of Louis Gregory and his Baha’i travel teaching efforts in the southern states.

Mrs. Bidwell has a photograph of Mr. Gregory that was taken at the Baha’i Temple, Wilmette, Illinois, dated June 1, 1944. She agreed to let me make a copy and then return the original to her. [Note: The original was returned as promised].

Mrs. Bidwell also said that she was in the company of Mr. Gregory on three separate occasions, but did NOT see him in Birmingham after 1945. One of the three times was “at a convention” (National Baha’i Convention).

Mrs. Bidwell has in her possession a photo album that includes photographs of David Villasenor doing an Indian style ‘sand painting’ at the ‘Indian Village’ in Valparaiso, Indiana, dated Sep 26-27, 1970. There’s also an earlier photo of him taken in March 1952.

Other photographs in her Album include:

~ Hands of the Cause of God, Mr. Samandarí, and Mr. Furitan (possibly taken in London, and at the same event)

~ Hand of the Cause of God, Alvin Blum (Also Knight of Baha’u’llah), photo taken in Fiji

A great amount of research is already completed on the life of Louis Gregory. There are written works about his tireless effort, as a teacher of the Baha’i Faith, especially in many southern states, and much is included in “To Move the World”, a book about the life Louis Gregory.

However, the extend of current research on the life of Louis Gregory does little to capture and portray the spiritual nature of his being that was the driving force of his creativity, moral courage, and awesome dedication to teach the Cause of Baha’u’llah. Much more must be done that not only details historical fact but also strive to capture the true essence of this “mild and serene, but dynamic” man whose innate nature is manifested by deep wisdom, an abiding sense of justice, graced, and intense spiritual insight. The extent, magnitude and impact of his leadership have yet to be fully revealed and appreciated.

[1] Miles College is a historically black college founded in 1898. It is located in Fairfield, Alabama, six miles (10 km) west of Birmingham. It is a private liberal arts institution of the Christian Methodist Episcopal Church (CME Church). Miles College is also a member of the United Negro College Fund. Miles College began organization efforts in 1893 and was founded in 1898 by the Colored Methodist Episcopal Church. It was chartered as Miles Memorial College, in honor of Bishop William H. Miles. In 1941 the name was changed to Miles College. -Wikipedia

NOTE:  This concerns the preservation and possible presentation of old photographs, documents and other material that would be helpful to more fully document Baha’i history.  If you have such material in your possession or know someone who does, I encourage you to contact me.  Arrangements can be made to document and preserve important items.  Proper credit assigned to all submissions.