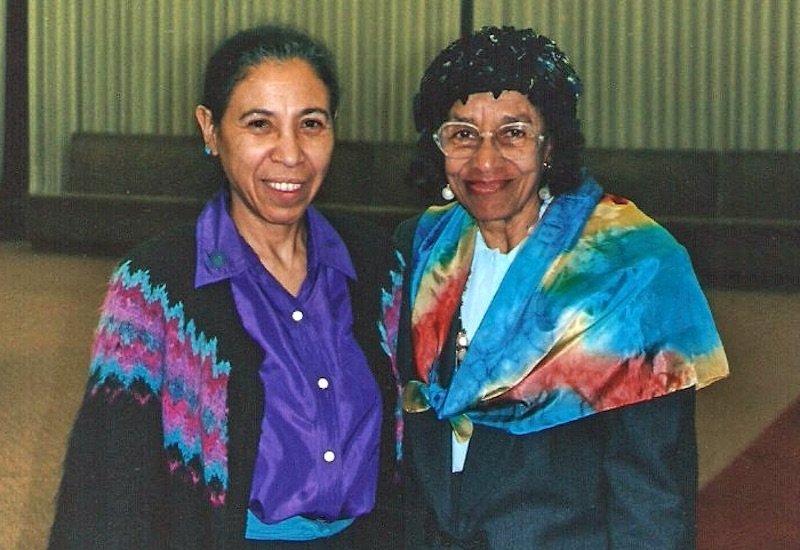 Zylpha Mapp-Robinson (r) is with Quida Coley at the 1992 Baha’i World Congress held at the Jacob-Javits Convention Center in New York City. They are both longtime Baha’i international pioneers, Zylpha for more than nine years in Africa (principally, Uganda), and Quida Coley for approximately six years in Paraguay, South America. Zylpha, as with many others over the years, responded to `Abdu’l-Bahá’s Tablets of the Divine Plan addressed to the followers of the religion in the United States in 1916–1917. The eighth and twelfth of the tablets written on April 19, 1916 and February 15, 1917 respectively, specifically mentioned Africa. `Abdu’l-Bahá’s call for Baha’i travel teachers and pioneers expresses the hope that…”Africa may become vivified with the breaths of the Holy Spirit…”
Uganda, Africa 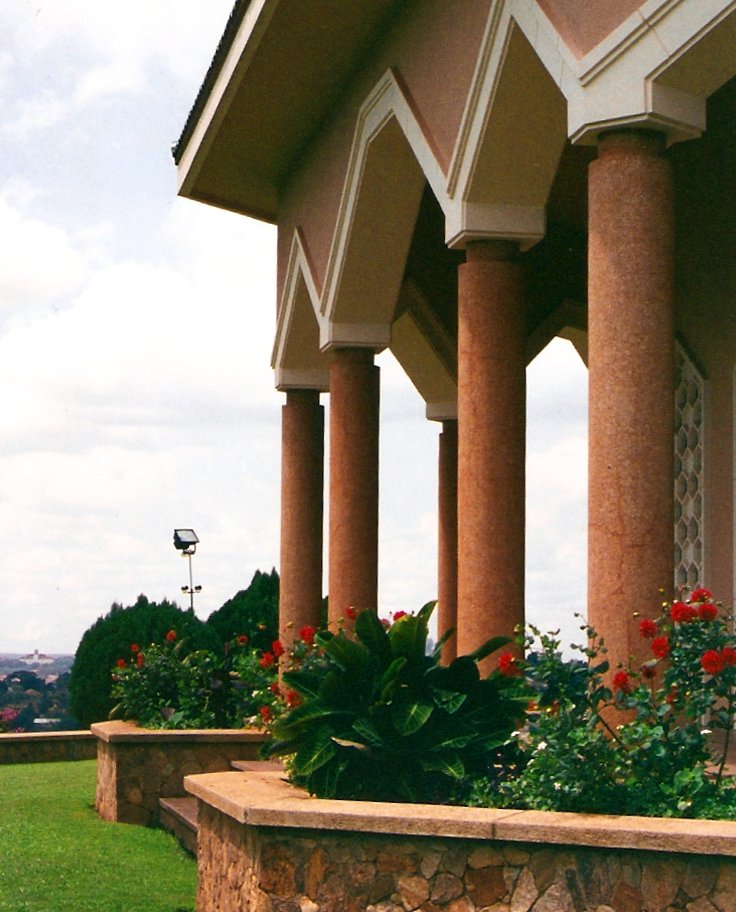 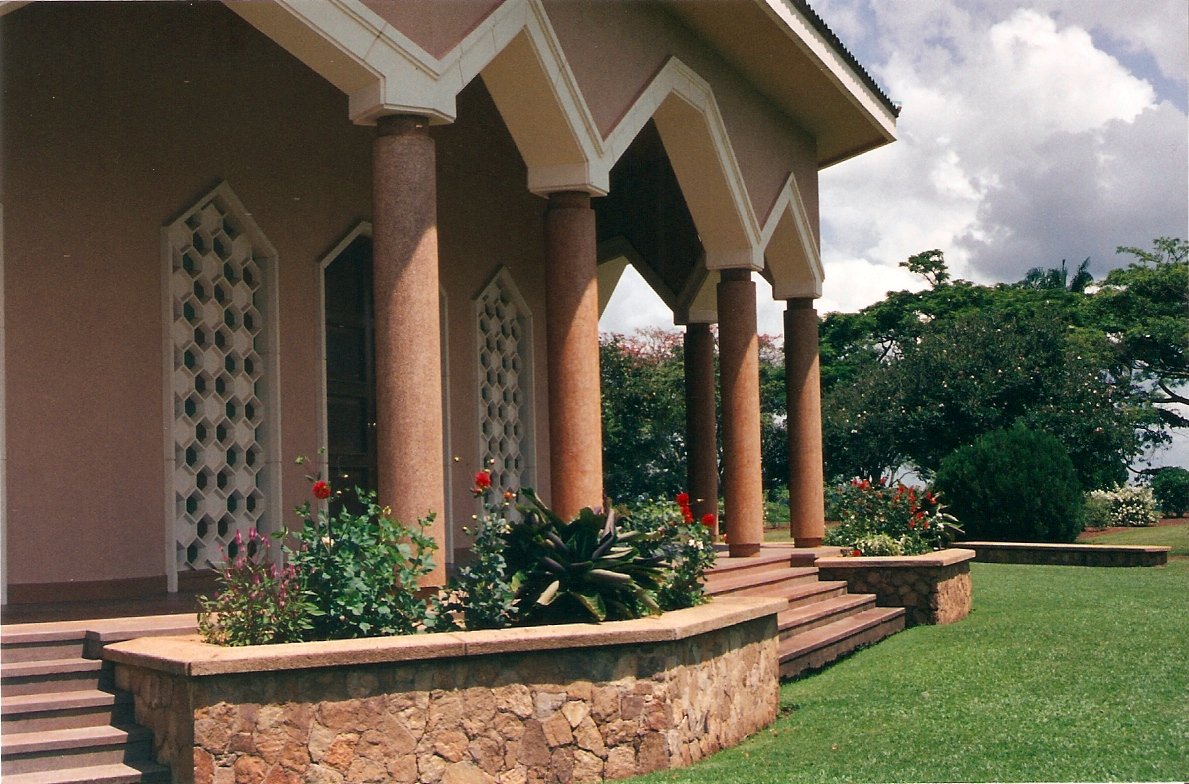 Portico of the Baha’i House of Worship Kampula, Uganda, Africa

Mašriqu-l-‘aḏkār, an Arabic phrase meaning “Dawning-place of the remembrances of God”, designates a Bahá’í House of Worship, or temple, of the Bahá’í Faith.
view more

There seem to be several discrepancies in the information provided by links.   This concerns who was the first African American woman to accept the Baha’i Faith in the United States. Accordingly, three widely different views are noted: (1) From an article written by Christopher Buck quotes a statement attributed to Abdu’l-baha:  “Render thanks to the Lord that among that race thou art the first believer”.  Buck states that this likely refers to the fact that “Mrs. Pocahontas” was the first African American woman to become a Baha’i (around 1908).  Ref.  Baha’i Teachings. (2) From an article written in ‘joyousjam 2012’ under the title  ‘Robert Robinson – a Jamaican in the USSR’.  Quote:  “…Zylphia Mapp, his wife, was born on August 25, 1914, in Cambridge to Zylpha Mapp Gray and Alexander Mapp; her mother was the first African American woman to become a member of the Bahá’í Faith in the U.S.A”.  Ref. Robinson/Mapp Marriage. (3) Facebook Post:  “In honor of Black History Month, some Baha’is you should know: Olive Jackson of New York City – in 1899 she became the first African American woman to join the Baha’i Faith”.  Ref.  Facebook. These three women are each identified as being the first African American of their gender to have become Baha’i in the United States; the first in 1899, the second around 1908, and lastly, Zylpha Mapp “Gray”.  The third person is actually Zylpha Odysell Johnson, Zylpha Mapp-Robinson’s mother.  She was born in 1891 in Boston, Mass., and married Alexander Massiah Mapp in 1910. Based on a talk given by Zylpha Mapp-Robinson, her mother and father first heard about the Baha’i Faith in 1916 when visiting the home of Harlan and Grace Ober in Cambridge, Massachusetts.  This is recorded under the title ‘Heroines of the Faith’, a talk given by Zylpha Mapp-Robinson, Chapter 17, in ‘Lights Of The Spirit: Historical Portraits of Black Baha’is in North America 1898-2000.  Edited by Gwendolyn Etter-Lewis and Richard Thomas. ISBN-13: 978-1-931847-26-1 (alk. paper).  Note also that this publication provides extensive information on the life of Zylpha Mapp-Robinson.  It is a work well worth reading (available on Kindle). **Boston Bahá’í Community Membership (Feb 1940) includes Alexander & Zylphia Mapp (Box 526, Avon, Mass) and their son, Benton Mapp (51 Summer St., Brockton, Mass). Also noted are Louis Gregory and his wife, Louise (Eliot, Maine). Many of those listed have other than a Boston, Mass. address.  Ref. Early History of the Bahá’í Community in Boston, Massachusetts, by Anise Rideout.

The house that Zilpha had constructed adjoins the Baha’i Temple property in Kampala, Uganda. Zilpha said she purchased the property and constructed the house with proceeds received from her late husband’s book sales.* She stipulated that upon her passing the house would be placed under the receivership of the National Spiritual Assembly of the Baha’is of Uganda. 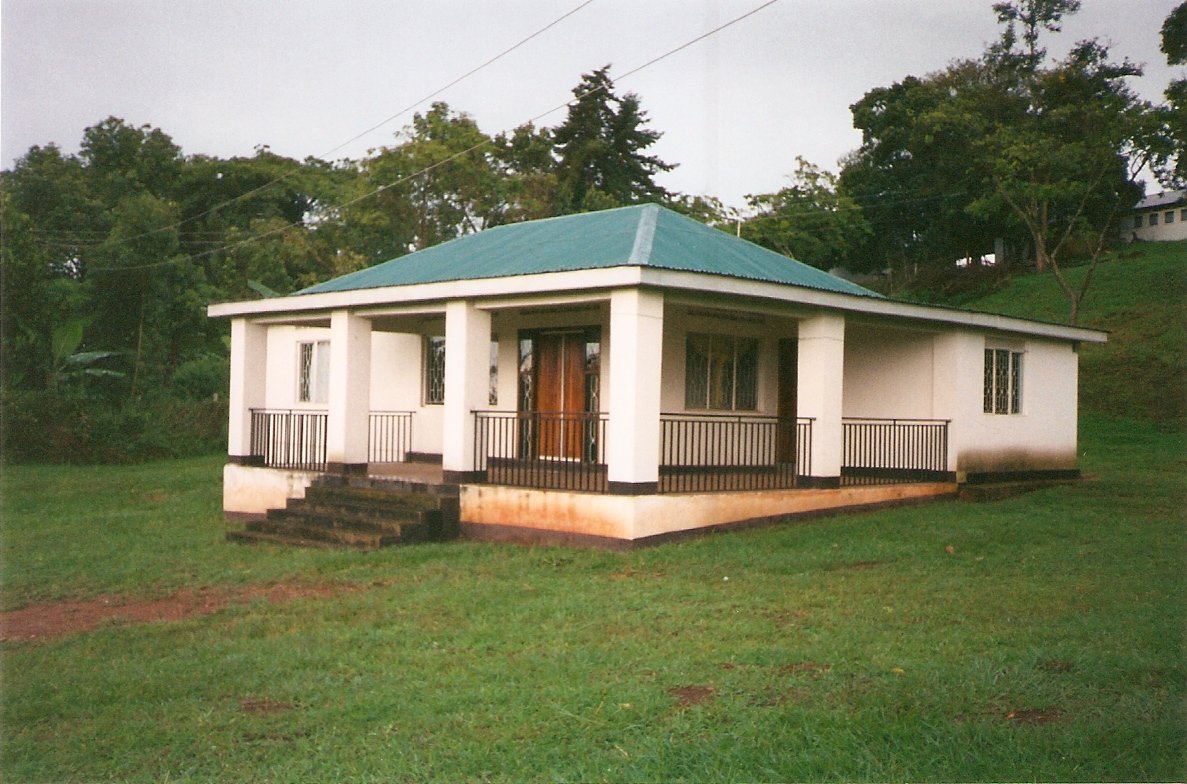 Zylpha brought with her a few copies of her (deceased) husband’s autobiography “Red On Black:  My 44 Years Inside The Soviet Union.  When I told her that I wanted to purchase a copy she looked very surprised but went right away to get a copy.  Once the transaction was completed, I asked if she would autograph it for me and this she did without hesitation.  It still remains as a treasured purchase in my library.

On a separate occasion (ca. 1977), Zylphia and Terry Randolph were discussing the impact of Baha’i Teachings in Uganda when she recalled her experience being in the presence of child soldiers, saying “You cannot imagine the look in their eyes, not understanding who they are or what they are doing”.  She visibly shuttered with a hint of fear as she recounted her experience.  She did not say it, but I believe she probably had encountered elements of the Lord’s Resistance Army (LRA), a rebel group that has long operated in northern Uganda, South Sudan, the Central African Republic, and the Democratic Republic of the Congo.

**Early History of the Bahá’í Community in Boston, Massachusetts, by Anise Rideout. Overview of history 1900-1940. Includes early translations of some 2-dozen tablets of Abdu’l-Baha. Unpublished Articles.

***Some sources list Washington, DC as the place where she died.  Needs clarification.

Baha’i Faith, Uganda.  “Pioneers like Zylpha Mapp served development interests in Uganda in 1971-2 while working as a director of guidance at the Tororo Girls’ School.[76] She was on a leave of absence from the public school system from her work in the States, and was cooperating with the Uganda Ministry of Education in developing a guidance program in other schools of the nation while also began editing the Ugandan National Baha’i Newsletter.”  Wikipedia

Baha’i Faith, Uganda.  “In 1976 Zylpha Mapp-Robinson, the daughter of the first African-American woman Bahá’í, who had pioneered in many places and who lived in Uganda nine years, was elected to the national spiritual assembly of Uganda in 1976.”  Wikipedia

Zylpha Mapp-Robinson arrives in Washington, DC, the nation’s capital (ca. 1978) and settled in with a private family located not far from the Baha’i Center at 5932 16th Street, North West, an area of the city often referred to locally as the “Gold Coast”. At that time the Baha’i Center was undergoing extensive repairs having suffered massive fire damage (ca. 1976) due to a faulty oil furnace. Zylpha learned that plans were being made for the Baha’i Center to have a resident Caretaker.  She requested and was granted permission to take on the position of Caretaker when repairs were completed and the Baha’i Center reopened.

After repairs were completed and the contractors paid a date was set for the Baha’i Center’s second dedication, planned as a major event announced to the public and included special invitations for timed presentations (to a degree, the occasion mirrored the first dedication of the newly purchased facility designated as the first Baha’i community-owned Center in Washington, DC (ca. 1967).  Zylpha and her husband moved into the newly constructed caretakers living quarters located on the second floor just a few days prior to reopening ceremonies.

Zylpha always referred to her husband as “Mr. Robinson” and was extremely protected of him.  He kept to himself and no one knew much about him, certainly not about his extensive background in the USSR.  Zylpha informed the Baha’i administrative body that her husband was organizing his notes for a book he planned to write and have published.  It’s not certain exactly how long they lived at the Baha’i Center, but Mr. Robinson would later receive recognition for his experiences in Russia.  He later passed away in Washington, DC.

See the ‘Addendum’ above right for additional information. Extensive information about Zylpha Mapp-Robinson, her life, service to the Baha’i Faith, and academic and professional accomplishments are found throughout this webpage and its various links, to include the background of her husband (he was not a member of the Baha’i Faith).

We note a few discrepancies in the information acquired from external sources and seek factual clarification for proper rendering.  Also, we do not have access to the Baha’i Archives in Washington, DC and the national Baha’i Archives in Evanston, Illinois.  Perhaps these might be available in the future.  Meanwhile, if you are able to provide verifiable information to help fill the gaps please do not hesitate to contact us.

Email (1 Jun 2018) received from Juanita Torrence-Thompson (Zylpha’s daughter) in response to my query and clarifies events associated with her mother’s passing:  “She passed away Mother’s Day weekend in 2001 in Queens, NY.  We flew her to DC for Burial next to her husband.  The DC Baha’is held a lovely memorial service for my mother at the Baha’i Center.  Yes, when I was editor and publisher of my Mobius [The Poetry Magazine], I held several contests in her name.  I have been thinking about her and dreaming about her a lot lately.  She is sorely missed.  Sincerely,  Juanita Torrence-Thompson”. 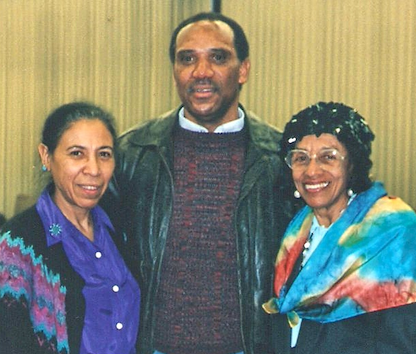 The narrative continues with two additional components, information about the life of Zylpha’s second husband, Robert N. Robinson, and the accomplishments of Juanita Torrence-Thompson, Zylpha’s daughter from her first marriage.  See the Addendum.