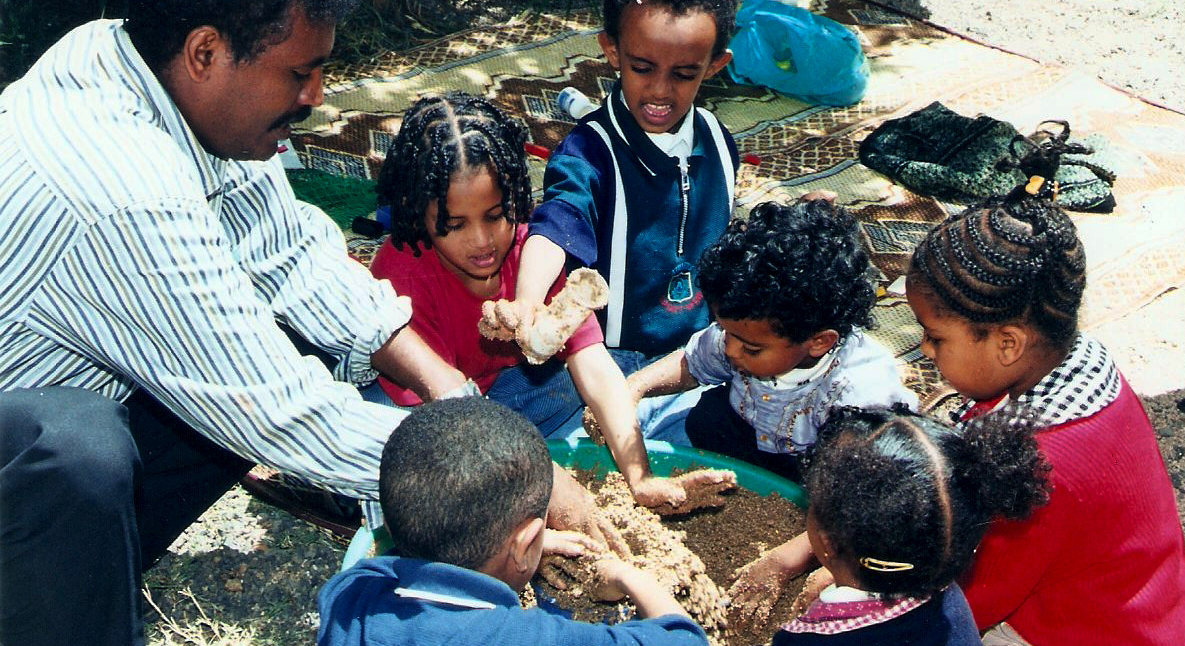 The history of Eritrea can be traced back to ancient Egyptian times when the ancient Puntites[1] who then dominated the land had close ties with Pharaoh Sahure and Queen Hatshepsut. The Aksumite Kingdom (also spelled Aksum, or Axum), rose to power during the 1st century AD[2]. The countries of the ‘Horn of Africa’—generally, Djibouti, Eritrea, Ethiopia and Somalia, were the birthplace of ancient civilizations as well as many modern cultural achievements.[3] The region underwent a series of major successive influences brought by South Arabians, Ottoman Turks, the Portuguese, the Egyptians, the British, and finally in the 19th century by the Italians.

To acquire appreciation for the growth and development of the Baha’i Faith into a global community since its founding in 1844 is to understand that this process unfolded without the specter of warfare, a method employed by several of its predecessors, and takes into account the challenges it faced within historical context of occurrence.

It is the Horn of Africa, a sometime turbulent region intertwined with an ethnicity common to Eritrea and Ethiopia, and challenged by other regional influences, that saw the arrival of its first-ever Baha’i pioneers. The establishment of the faith in this region is interwoven with a series of national and international events, and influenced by its rich cultural diversity.

In 1933 the first to arrive in the region was Sabri Elias, a young man seventeen years of age and former member of the Coptic Christian Church. He had responded to a call by the Baha’i community of Egypt for a “suitable person” to undertake a dual mission to Ethiopia: (a) investigate the news that certain individuals in Addis Ababa considered themselves to be Baha’is; and (b) if the claim was found groundless, to then open that land to the Baha’i Faith. Mr. Elias arrived in Addis Ababa in January 1934, and his efforts to find those who claimed to be Baha’i did not bear fruit. As a result he focused mainly on teaching the Baha’i Faith, to establish it in the country. His hard work proved successful, and he was subsequently designated a ‘Knight of Bahá’u’lláh’. Other Bahá’ís who came with their families later joined Mr. Sabri Elias, and on November 8, 1934 they (10 adult Baha’is) elected the first Local Spiritual Assembly in Addis Ababa, Ethiopia. Members: Atto, Sium Gabril [sp]-Chairman, Atto, Haila Gabril-Vice-Chairman, Habib Boutros, Sabri Elias-Secretary, Edouard Goubran, El-Saad Said, El-Saad Mansour, Abdu’llahi Ahmed, and Aurahil Egsabaihir.

Mr. Elias would shuttle between Eritrea and Alexandria, Egypt engaged in translating and printing various Baha’i materials. The Baha’i community was severely impacted due to the Second Italo-Abyssinian War[4], which caused many of its members to depart the country; also Mr. Elias, who in 1955 decided to return to Egypt.

The ‘Ten Year World Crusade’ (1953-1963) was launched by Shoghi Effendi to facilitate an organized expansion of the Baha’i Faith.[5] During this period the Baha’i community of Ethiopia was under the jurisdiction of the ‘National Spiritual Assembly of Egypt and Sudan’. In 1956 it was renamed the ‘National Spiritual Assembly of the Baha’is of North-East Africa’, with its seat in Cairo, Egypt. Administratively, its geographical area included: French Somaliland, Egypt, Sudan, Abyssinia, Libya, Eritrea, British Somaliland, Italian Somaliland, and Socotra Island.

Aftermath of the Ten-Year Crusade

During 1968, after the conclusion of the Ten-Year Crusade, Sudan, Somalia and Ethiopia were formed as a Regional Assembly. Its members were: Gila Michael Bahta, Dr. Leo Neiderreitter, Gamal Rushdy, Asfaw Tessema, Dr. Heshmat Farhoumand, Dr. Hushang Ahdieh, Ursula Samandari, Assefaw Habte Michael, and Rabbi Teele Mariam. This body, well into 1969, put forth a number of initiatives and organized collective effort to extend Baha’i teaching to outlying areas in the region it administered. They were able to recruit international Baha’i speakers to assist with the project, and also formulated plans to establish a Baha’i winter school.

The Baha’i Faith was officially banned in Egypt in 1960, at which time its seat was moved to Addis Ababa. Ethiopia was now deprived of its main source of support and by 1963 there was only one local Baha’i administrative body, the Local Spiritual Assembly of the Baha’is of Addis Ababa. In addition there were seven groups: Adua, Alamaya, Debrezeit, Dessie, Dire-Dawa, Gondar, and Jimma; and twelve individual believers residing in the following areas: Adigrat, Ambo, Awassa, Bedele, Endeselasie, Gorsum, Harar, Hosana, Kalafo, Nazareth, Wollisso, Wonji. However the faith continued to develop in the region, and later saw the election of national Baha’i administrative bodies in Sudan (1971) and Somalia (1973).

As previously noted, Azmach Seyoum Gebriel was said to be the first to accept the faith in Addis Ababa. He later left Ethiopia to settle in Eritrea, and became a member of the first Local Spiritual Assembly formed in Asmara in 1955. His son, Tamerat Seyoum, is said to be the first to accept the Baha’i Faith in Asmara. From these early beginnings the community developed to the point where in 1995 saw the election of the first National Spiritual Assembly of the Baha’is of Eritrea, and headquartered in Asmara. [6]

[1] Somali people, the ‘Land of Punt’, also called Pwenet, or Pwene by the ancient Egyptians. Some biblical scholars have identified it with the biblical land of Put. The exact location of Punt is still debated by historians, but most scholars believe Punt was located to the southeast of Egypt, most likely in the coastal region of what today are northern Somalia, Djibouti, Eritrea, Northeast Ethiopia and the Red Sea coast of Sudan. However, some scholars point instead to a range of ancient inscriptions that locate Punt in the Arabian Peninsula. Therefore, it is also possible that the territory covered both the Horn of Africa and Southern Arabia.
[2] During the first century AD, Aksum began a rapid rise to prominence, trading its agricultural resources and its gold and ivory through the port of Adulis into the Red Sea trade network, and thence to the Roman Empire. Trade through Adulis also connected eastward to India, providing Aksum and its rulers a profitable connection between both Rome and the east.
[3] There are also broader definitions, the most common of which include the countries of Kenya, Sudan, South Sudan, and Uganda.
[4] In 1935, Benito Mussolini, the Fascist leader of Italy, had adopted Adolf Hitler’s plans to expand German territories by acquiring all territories it considered German. Mussolini followed this policy when he invaded Ethiopia. His main aim of invading Ethiopia was to boost Italian national prestige, which was wounded by Ethiopia’s defeat of Italian forces at the Battle of Adowa in 1896, which saved Ethiopia from Italian colonization. Mussolini saw it as an opportunity to provide land for unemployed Italians and also acquire more mineral resources to fight off the effects of the Great Depression. Ref.: Toynbee, A. (1946). A study of history, London: Oxford UP University Press.
[5] In 1956 National Spiritual Assemblies were formed: Central & East Africa, North West Africa, South & West Africa.
[6] In 1956 Eritrea was part of North-East Africa, Abyssinia. Ref.: http://bahai-library.com/hassall_bahai_communities_country#24